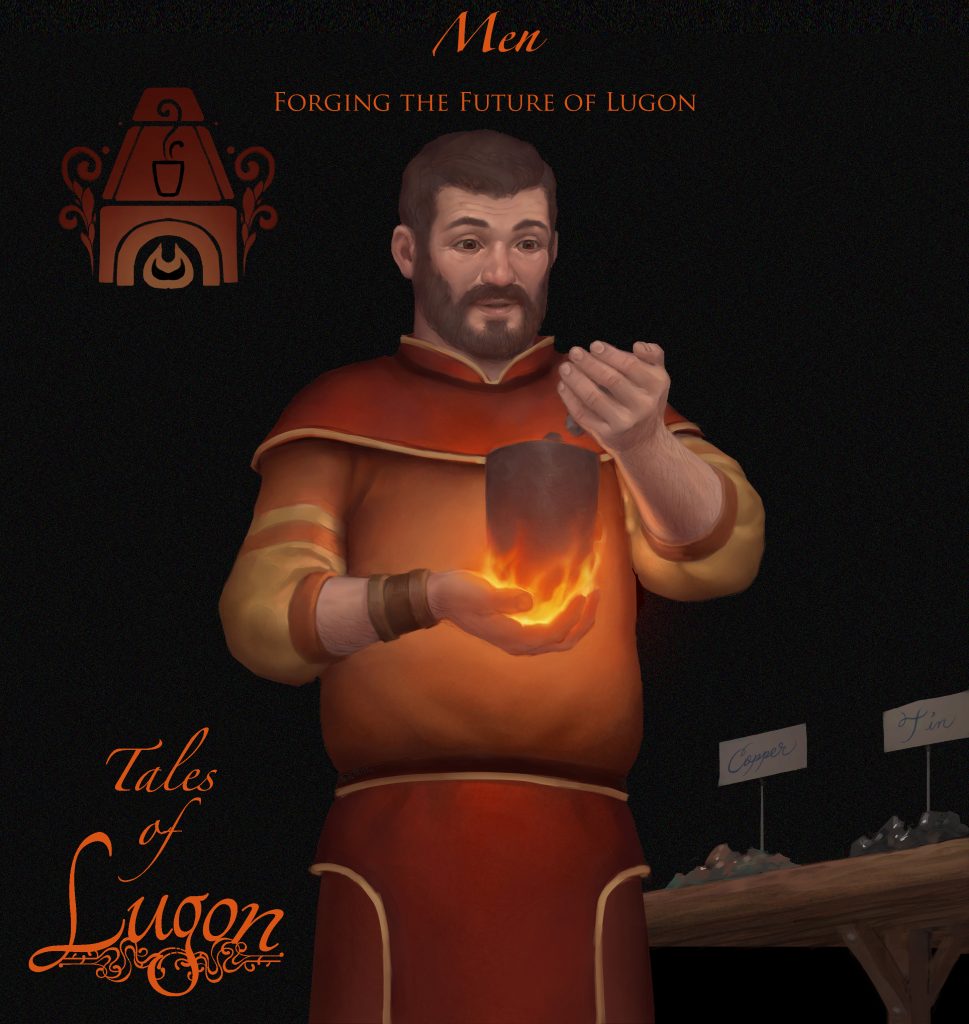 The Men of Lugon are no different the humans of our own world. They are the most diverse race, coming in all shapes, sizes, and colors. They have the shortest lifespans, typically ranging from 80-100 years. As is typical here, males tend to be slightly larger than females.

The Divine Task given to the Men of Lugon was “Forging”. A crude translation would be “technology” – they are to take what exists in Lugon and create new materials and items from the basic elements of the world. However, unlike our understanding of “technology”, the original goal was not to ease the burdens of life (though it sunk to that over time). To aid in this task, Men were given the ability to manipulate the temperature of the air around them, most commonly through the creation and manipulation of fire (though lowering temperature was also possible). However, when Bälech conquered Lugon, he Sundered all Men he could find from their Divine gift to lower their ability to resist or, later, rebel.

Between most Men being torn from their Divine gift and the interbreeding of those that still could with those that couldn’t, it has become very rare to find Men with their Divine abilities intact. And with no Men in the Dawn having any knowledge of the Divine tongue, even rarer for those who have to ever become aware of it. Those that can and do learn are often called Wizards by their fellow Men and Dwarves. Elves will often call them “Pure Men”, but will often use the term Wizard for clarity when speaking with the other races.

As they are the most diverse in appearance, so too are Men the most diverse in culture. With their Divine Task being that of Forging, it was necessary for them to be the most adaptable race. Without such a strong ability to mold themselves to their environment, the process of bringing new elements into reality would have been very limited. However, this also made Men the most unstable race, most easily manipulated, and, coupled with their short life spans, the most likely to forget truths found in looking back to the past. When Bälech established The Dawn, these weaknesses were intensified, with the Emperor cutting off access to the true History of Lugon before his takeover, and manipulating the populace to suit his whims. The Men of the Savanir, due to their circumstances, cling to their history and Divine Task. As such, they are often dressed in various shades of red, orange, yellow, and black.\

With their bodies being the weakest of the Noble Races, Men have come to rely on their technology to give them an edge in battle. They invented many new weapons (often perfected by the Dwarves), and even elemental compounds that could be used to wreak havoc on their enemies. Though in duels and for self-defense they will employ all manner of weapons and armor styles, in organized combat they prefer sturdy armor that dampens blows and weapons that keep their enemies at a distance. Large zweihänders, spears, maces, staves (and the relatives of these weapons) are their specialty, as well as the longbow (unmounted). When they use smaller weapons, they almost always carry a large shield.