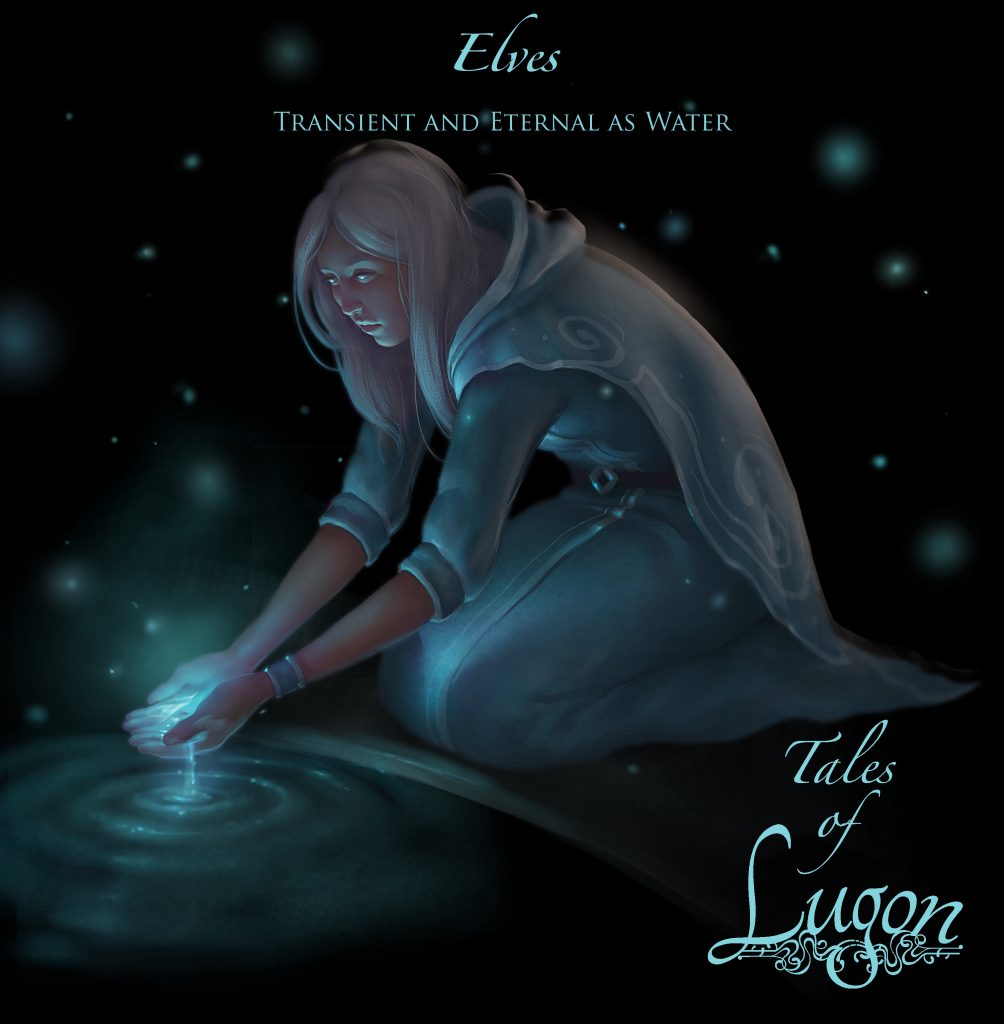 Most Elves stand approximately seven feet tall, with their women-folk normally averaging just under it and the men-folk just over it. Their hair is either white, silver, a silvery-blue, or (in rare occasions), jet black. They are beautiful, with an athletic muscle tone and fair faces. Both women and men typically have long hair, but the differences in their faces are pronounced, as men have a more square jawline and larger noses and wider mouths while the women’s chins taper into a triangular shape with smaller noses and mouths.

The Divine Task given to the Elves by Xiarch was to pursue the knowledge and wisdom embedded into the fabric of Lugon. As such, their powers involve the mind. They can read and alter the mind of those they are in contact with when using the Divine Tongue. Also, they can access the memories of all of their people who have returned to the Sea – a spiritual resting place for all Elves souls when they Fade after 500 years (or are killed and returned to the Sea) until they are reborn. The spiritual Sea and the physical waters of Lugon have a direct connection, so Elves’ powers are enhanced when touching water. Also, while Elves are reincarnated, they cannot differentiate the memories of their past lives from the racial memory of all Elves tied into the Sea. The Elven souls in the Sea may also grant visions to currently living Elves of potential futures based on prophecies from Xiarch and their seeing repeating patterns over time, but they do not actually know the fated future.

Elves are typically wise and stoic. However, they can become frustrated or fearful due to the over-eagerness or rash behavior of other races and even be stubborn amongst themselves when they feel the behavior of others is foolish. They also have trouble seeing where separate events and people end because they so well see the interconnectedness of all things. Many Dwarves and Men see Elves as cold, but this is not true. It would be more accurate to say they are so busy analyzing and weighing every possible outcome of their actions and words that they do nothing without great deliberation. But for the mortal races, this can be frustrating when immediate, sympathetic responses are appropriate.

Because of their connections to water and knowledge, they favor blues (of all shades – both light and dark), silvers, whites with accents of yellow. Their script is like a flowing river with no repeating, intersection, or tracebacks. The tightness and number of turns in a given space dictate the syllables of speech.

Elves’ bodies are naturally resistant to blunt force, allowing their armor to focus on reducing piercing and slashing attacks to vital areas. They tend to favor light plate armor with nothing inhibiting their full range of motion and use their speed to its full potential. Their weaponry tends to be one-handed scimitars and daggers if fighting hand-to-hand, though some choose to use a small buckler. They are very fond of the bow, especially in mounted combat. Though not their preferred method of fighting, their strength makes them excellent spearmen and halbeardmen when defending against enemy cavalry.