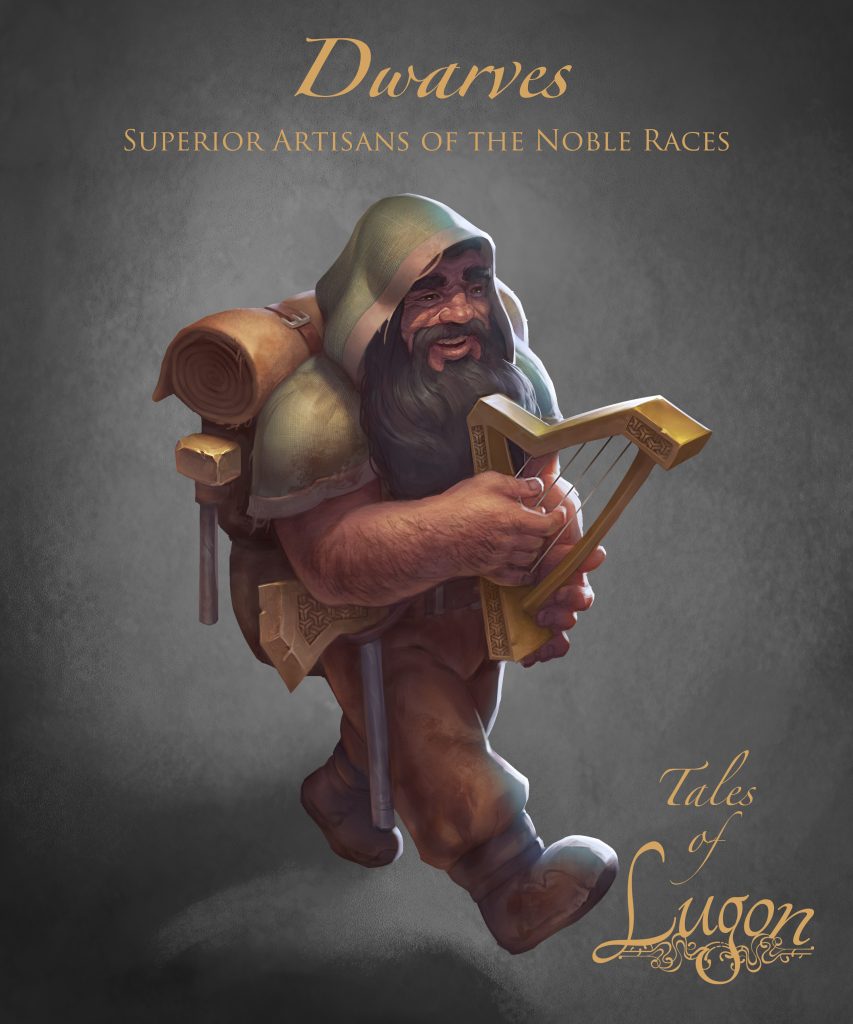 Male Dwarves stand between 4’0″ and 4’6″, females between 3’10” and 4’2″. Their hair comes in black, brown, red, and a dark, midnight blue. Skin can be various shades of light, tan, and dark. Male Dwarves often have long beards that extend past their waist (except the young), while female Dwarves do not have facial hair. On both their head and most of their bodies, men’s hair is coarser and thicker, while the women’s hair is very fine, and can only be noticed on their bodies up close. Only female Dwarves braid their hair, while the men keep it neatly combed (when circumstances permit). Elder Dwarves may go gray or bald. All Dwarves are solidly built, but very few carry much, if any, fat on them. Female Dwarves tend to be slightly more lean and athletic than their male counterparts. The average Dwarf lives to be between 300-350 years of age.

Xiarch gave the Dwarves of Lugon the Task of Craftsmanship. As such, their Power in the Divine (to read about the Divine in detail, click here) allows them to shape the elements of Lugon. As with all other Noble Races, though they may learn Words in the Divine Tongue not related to their task, they will be powerless. In theory, they can shape liquids and gasses in addition to solids, but with nothing to hold it in place, these will simply fall back to their natural state right after taking shape. Still, it is sometimes used for entertainment or showmanship.

Unlike Dwarves in many worlds, the Dwarves of Lugon are of a natural disposition to welcome any that bear them no ill will, though they do have a strict hierarchy when it comes to social relationships and fellow Dwarves, especially their family and clan, will take precedence over all others. However, they do see the connectedness in all things, and they are very much linked to Elves and Men much the same way trees are linked to sunlight and rain. They also work with far more than just metals and stone. In fact, their worldview often employs weaving metaphors, with just as many Dwarves being tailors as smiths, and are just as inclined to carpentry as masonry. They see patterns in all things, and as such geometric designs feature prominently in both their clothing and their weaponry/armor. They have no afterlife, but rather view their bodies returning to the earth and becoming one again with the elements their posterity will mold to be the ultimate embodiment of their Divine Task. Needless to say, children are very precious to Dwarves and can be why they become clannish in spite of their naturally friendly disposition.

Due to their immense strength and relatively short reach, Dwarves tend to prefer heavy axes and maces, both of the single-handed and two-handed variety, though the most common is a single-hand with an immense shield that can aid in overpowering their foes. A few dual-wield their single-hand weapons, using their natural speed (surpassed only, and barely, by the elves), but this doesn’t allow them to take advantage of their fortitude to wear down foes as well as more defensive technique, nor utilize as much as their power as a two-handed weapon. However, all Dwarves are prone to battle-lust once they begin to see those they care about fall, during which time friend and foe alike would do well to give them a wide berth.